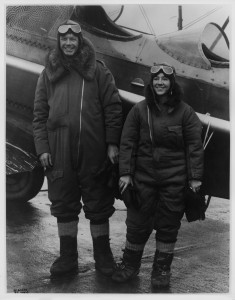 Charles and Anne Lindbergh in 1930. In a wife, Lindbergh sought a co-pilot, and Anne Morrow proved to be an skillful aviator. The early years of their marriage, when they often flew side-by-side in small planes, were the happiest.
Credit: Lindbergh Picture Collection, 1860-1980. Photographed by R.W.G.H., St. Louis. Manuscripts and Archives, Yale University Library [MS 0325B].

1. To describe the exclusive group of super-achievers in your book, you coin a new term, “obsessive innovator.”   Why did you feel the need to do this?

At present, we associate obsessives with careful, plodding performance rather than with bursts of creativity.   We tend to think that they are boring, uncharismatic types who are best suited to being a #2—say, a CFO.   Likewise, management experts often assume that the best CEOs rarely care about details and order; and according to the conventional wisdom, most movers and shakers are “narcissists,” to use the old psychoanalytic lingo or “hypomaniacs,” to use a concept from  biological psychiatry.   But I kept finding a link between powerful internal pressures (i.e., particular obsessions and compulsions) and extraordinary external achievements.   To stake out my position, in my prologue, I compare the late Steve Jobs with his contemporary and longtime friend, Oracle CEO, Larry Ellison.   Like the historical figures in my book, Jobs was an “obsessive innovator,” not a narcissist or hypomaniac, as Ellison has often been described.   Jobs couldn’t stop making “insanely great products;” that’s what he lived for.   In contrast, Ellison has always been much more goal-directed; he has sought money and fame, and the path to getting there has been much less important.   I wanted to emphasize that obsessives too have changed the world.

2. Did the icons in your book suffer from a particular psychiatric disorder or disorders?

The seven dynamos in my book all struggled with a bunch of serious psychiatric woes.   First and foremost was obsessive-compulsive personality disorder (OCPD), an inflexible way of interacting with others, in which the person becomes obsessed with order, details and control and thus extremely demanding.  Other common afflictions were depression and severe anxiety.   For example, HJ Heinz, as he reveals in his diary, battled anxiety from his twenties until his death at 74.  And in the last few decades of his life, his adult children would insist—as much for their own sanity as for his—that the temperamental patriarch go to a German sanatorium every summer to chill out.  I also frequently bumped up against addictions such as prescription drug addiction and sexual addiction.   As a rule, obsessives have enormous difficulty in intimate relationships; they seek to dominate rather than connect, and several of the men in my book were lifelong womanizers.  Lindbergh, he of the three German mistresses plus the assorted girl friends, wasn’t the only one.   Melvil Dewey also was a skirt-chaser who couldn’t keep his hands off the librarians;; in fact, he was eventually kicked out of the American Library Association for sexual harassment.  Though he loved order, Dewey, like several of the others, had a wild side.  Of their sybaritic tendencies, one psychiatrist told me, “Obsessives can be like bunnies.”  Surprisingly, the same psychiatric problems that could be a liability on the home front typically turned out to be an asset at the workplace.  After all, the ability to control and manipulate others can be good for your career.

3. How did you go about selecting the seven obsessives?

I initially considered several dozen candidates before whittling down my list to about ten, at which time I did more extensive research.   For example, I thought about including Julia Child; however, after digging into her archives at Radcliffe’s Schlesinger Library, I found that she wasn’t troubled enough; she enjoyed life too much.   Though her magnum opus, Mastering the Art of French Cooking, required a certain obsessionality—thorough and encyclopedic was it—Child was too easy-going and fun-loving.   And she enjoyed a long, loving and mutually satisfying relationship with her husband Paul—something that is rare for a true “obsessive innovator.”

Over the course of American history, there have been far more than just seven obsessive super-achievers.   I encourage readers to submit their own suggestions on the contact form.  Though not an obsessive myself, I would like to start compiling a definitive list; I suspect it might turn out to be massive.

4. Could you describe how you researched each chapter?   I began by reading the major biographies.  I would then interview a key biographer.   For instance, I conducted long interviews with Leigh Montville, the former Boston Globe reporter who wrote the definitive Ted Williams bio, and James Jones, author of the comprehensive Alfred C. Kinsey: A Life, which took nearly three decades to write.  For my 20th century subjects, I  then supplemented my reading by interviewing surviving family members and friends.  For the Ted Williams chapter, I interviewed two of his nephews as well as former ball players who knew him well, including Hall-of-Famers Bobby Doerr, Yogi Berra and Wade Boggs.  To write about Charles Lindbergh, I traveled to Munich to interview his eldest German child, Dyrk Hesshaimer; I also visited the apartment where Lindbergh used to live with Dyrk and his mother.   I also spoke with Lindbergh’s American daughter, Reeve, who has written movingly about her life with her father in her  memoir, Under A Wing.  I  interviewed Estee Lauder’s three grandchildren—William, Aerin and Jane–at the compamy’s Fifth Avenue office where I also got to see the founder’s suite, which has been preserved just as she left it.  And I also spoke on the phone with Lauder’s two sons, Leonard and Ronald, who have made their mark both as executives in the beauty biz and as philanthropists.

For the icons of the 18th and 19th century, I headed to the archives.   To read Kinsey’s correspondence, I went to the Kinsey Institute in Bloomington.  I also learned a lot by visiting Kinsey’s house in Bloomington and interviewing the current owner, who purchased it from his late wife.   Though Kinsey was obsessed with order, the garden behind his house was decidedly disorderly!  To research Melvil Dewey, I combed through manuscripts at Amherst College where he began developing his decimal system when he was an undergraduate and at Columbia University where he built the world’s first library school.  And I spent several days at the Heinz History Museum in Pittsburgh to read the diaries of HJ Heinz.  And for Jefferson, my trip to Monticello was of course critical.  I enjoyed examining all the gadgets—such as the revolving bookstand—that our most erudite (and perhaps also most geeky) President loved so much.  And I also visited the Massaschusetts Historical Society which houses the biggest slice of Jefferson’s manuscripts.